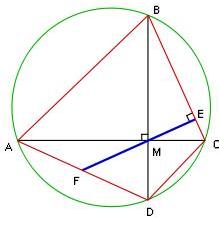 So, in a “non-unequal” cyclic quadrilateral (that is, an isosceles trapezoid), the length of each diagonal is .

He continues to give formulas for the lengths and areas of geometric figures, such as the circumradius of an isosceles trapezoid and a scalene quadrilateral, and the lengths of diagonals in a scalene cyclic quadrilateral. This leads up to Brahmagupta’s Famous theorem,

to be continue …..on http://www.speak2world.wordpress.com

we are aware share to knowledge. View more posts